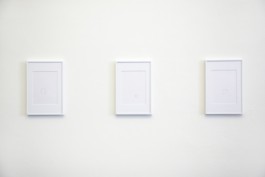 The work consists of 3 white pieces of paper with a hand drawn circle that are framed in a clean classical way. The work itself goes hand in hand with the title „Nothing explained by circling nothing on a white piece of paper“ that is both explaining the basic facts as well as hinting towards the underlying attempt to show nothing (which is doomed to fail from the beginning).
Nothing hereby refers to the emptiness inside the circle as well as the number 0 that can be read as nothing.
At the same time, the title not only points to the attempt to show nothing but is also questioning the general need to further explain artworks beyond what is shown in the first place. The word nothing cannot be seen as a void in an existential sense of emptiness, not ephemeral – as in not existing. By nothing I mean non-matter, non-physical as in bodily and non-perceptual as not perceivable through the senses.