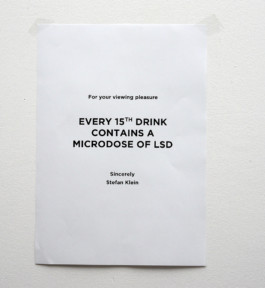 The Usage of LSD seems not to be linked to the old -ages hippies anymore - suddenly everyone, from software engineers to corporate manager is dabbling in it. Not in large, consciousness-altering amounts but rather in infinitesimal microdoses said to have an array of desirable effects: increasing focus, enhancing creativity and problem-solving abilities, even heightening empathy. The effects of a micordose has no psychedelic fireworks, Instead, the LSD functions more as a cognitive-enhancing drug.
This drug, once linked to an anti-capitalist movement promising gates to new insights is turned into a capitalist product. And isn’t that something that is very closely related to what is expected from artworks. To enlighten the viewer, to make everything clearer whilst deeply embedded in a cultural machinery.
However also during the opening event itself it is creating a stumble stone to the usual routine behaviour of a stroll through the exhibition, a quick drink at the bar and small talk. With every drink you wonder if something changed in your perception. Does it change the way you appreciate the artworks in the exhibition? Is some sort of placebo effect kicking in, even if you did not ingest anything?