This image shows the small South Sea state of Kiribati in the middle of the Pacific Ocean. It is one of the first and most severely affected countries by climate change and some island states will disappear or no longer be habitable in the near future.

Folded and placed in your wallet to carry around this work proposes a new way of commemoration and of the idea of a monument.

Rather than having one solid statue or installation this monument works in a humble and fluid way. A small precious item, an island in your pocket, that is being re-activated when shown to other people, while talking and thinking about it.

It is a monument in time and space. Something that is not dead and solid but rather fluid through its constant relocation and re-activation. Reflecting on all this time that was before us and will come after us, memory becomes an active part that creates an attitude towards the world we live in. 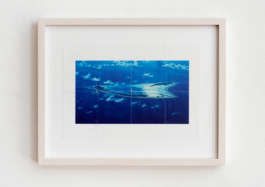