A piece of marble was found in the streets of Athens and transferred to Berlin.

As the favorite medium for Greek and Roman sculptors and architects from the BC era, marble has become a symbol for the cradle of Western culture, its thinking tradition and today stands for a representative refined taste. Philosophical school of Stoicism even chose its name referring to the marble architecture.

In contemporary Greece and especially Athens, marble is present in daily life in various (representative) buildings, whether those are the ruins of the Acropolis or the parliament building at the Syntagma square or simply the foyer of a residential house.
Through recent political events that climaxed in public space in big demonstrations, marble also received a new connotation: knocked off from the pavements and storefronts and turned into stone chunks it is used as a protest “tool” to show people’s discontent.

As the frontier of Europe’s borders and a state in financial crisis, Greece is dealing immediately with major European questions and topics (migration, buffer zones, nation states…). In both playful and subversive way, the placement of the stone is symbolically circumventing the structural order present in today’s (European) bureaucratic system – debating an alternative approach in solution finding.

Using the marble piece as a doorstop, does not only literally keep the entrance door open but it also keeps an institution open – as to have one foot in the door. Instrumentalizing it, is again another way to change the original purpose of it, to alienate it (“zweckentfremden”). Hereby the transformation of an object is a transformation of context: a translation as cultural transition. . 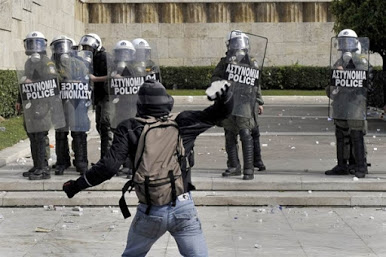 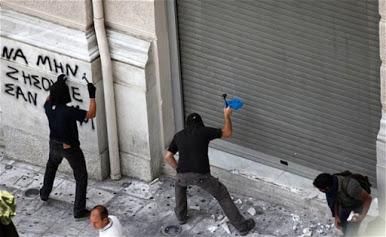 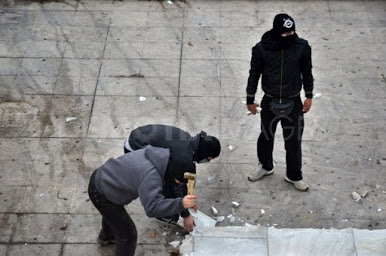